Matt Thornton, one of Centreville’s famous native sons, was born on September 15, 1976 in Three Rivers, Michigan and graduated from Centreville High School in 1995. Standing 6’6” and weighing 235 lbs. Matt pitched and bat left-handed.  Although, drafted by the Detroit Tigers in 1995, Matt continued his education at Grand Valley State University playing baseball and basketball for the Lakers.

He was then drafted by the Seattle Mariners in the 1st round (22nd overall pick) of the 1998 amateur draft.

He navigated his way through the minor league circuit and made his major league debut on June 27, 2004, with the Mariners in a game against the San Diego Padres, pitching brilliantly over 4 innings, only allowing 3 hits and striking out one batter. Throughout the season, the Mariners used Thornton for mostly middle reliever duty, except for one game when Thornton started and pitched 8 innings, allowing 4 runs on 8 hits and walking and striking out 7 batters. Thornton finished the 2004 season with a 1–2 record and 4.13 ERA, striking out 30 batters in 32.2 innings of work.

Matt was traded to the Chicago White Sox in 2006; then to the Boston Red Sox in the summer of 2013 obtaining his World Series Ring.

In January of 2014 Matt was traded to the New York Yankees and then acquired by the Washington Nationals.

Matt announced his retirement from professional baseball on November 8, 2016.

Verne Troyer, another native son, was an actor and stunt performer and appeared in numerous movies and television shows.  His most notable role was Mini-Me in the Austin Powers movie The Spy Who Shagged Me co-starring with Mike Myers.

Verne was born on January 1, 1969 in Sturgis, Michigan and attended Centreville High School. He was homecoming king in 1986 and graduated in 1987. He was notable for his height of 2’8” making him one of the shortest men in the world.  He had cartilage-hair hypoplasia dwarfism. He passed away at 49 years of age on April 21, 2018 in Los Angeles, California. He is buried at Leonidas Cemetery in Leonidas, Michigan. 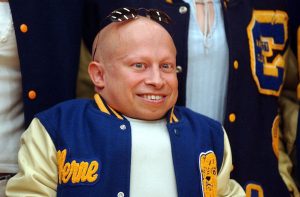